The Next Generation of Renewable Energy

Pterofin products are controlled by a simple counterbalance system that synchronizes the wings’ position and pitch with a mechanical leverage point on the body of the device.  The outcome is a coordination of harmonizing the wings pitch angle to a natural frequency of a fluids specific velocity.  This oscillating motion is low in RPM and high in torque, which allows it to be extremely efficient at both pumping water and generating electricity.

When a Pterofin encounters high winds, gust, or debris, a rotational control system allows the wing or wings to sweep back into the direction of the current, bringing Pterofin power to a halt and making it act at that point simply as a weather vane.  This makes it much more aerodynamic and gives it a far more streamline profile than any turbine.  We'd like to think it knows how to hibernate or "go dormant" to avoid over-stress on the moving parts that leads to high wear and tear, and also creates far less noise pollution.

Through licensing IP agreements with manufacturers who are interested in helping preserve our environment, improve their product line, and expand into new segments that were previously unattainable, Pterofin technology is going to be the next generation of renewable energy for first and third world countries.

Wind Power  -  2015 was an unprecedented year for the wind industry as annual installations crossed the 60 GW mark for the first time in history. More than 63 GW of new wind power capacity was brought on line. The last record was set in 2014 when over 51.7 GW of new capacity was installed globally.

Hydroelectric Power  -  Hydropower is a mature and cost-competitive renewable energy source. It plays an important role in today’s electricity mix, contributing to more than 16% of electricity generation worldwide and about 85% of global renewable electricity. [2]

Our initial target market will include homeowners who want to reduce their cost of electricity. Some may already live off the grid, while others are simply interested in utilizing renewable energy to reduce their carbon footprint. Recent studies have shown that having a source of backup power is becoming more commonplace, as we are becoming more dependent on energy, with electric vehicles, lighting, heating and refrigeration. Most of these homeowners have a gas or diesel generator and/or utilize solar energy to supplement the power for their appliances. Unfortunately, almost all residential areas here in the US have vetoed all propositions to use wind energy because of their noise and harm wind turbines can cause to birds and bats. Furthermore, most communities do not want large or small wind turbines marring their landscape’s natural beauty.

After the success of our first target market we will partner with manufacturers and contractors to install our products on tract homes, small businesses, and suburban housing.  This will allow us to gain the traction we need to compete with the larger scale industrial wind farms that provide power to large cities and millions of homes across the US.

Turbines are:
Images [4-7]
Unlike a turbine, Pterofin technology is: efficient in low currents, inexpensive to manufacture, reliable in heavy currents, has a low cost of maintenance, quiet operation, is environmentally friendly, aesthetically pleasing, and can be made out of a wide variety of materials allowing it to be mass produced and easily adopted around the world.

Owner and inventor of Pterofin, Wallace Kempkey, started working on the design back in 2006. His inspiration came from attempting to reverse engineer the rear fin of a fish to create electricity.  Four years later he filed a patent on something he thought would be the next generation of renewable energy.  "Birds and fish are extremely efficient at using energy to create motion in a surrounding fluid, so why not try to create energy by using that same motion within a moving fluid?"

Jarrod Lyman has been working in PR and social media for more than 14 years. In that time he's created multiple presences for popular destinations and businesses. During the day, he manages the award-winning social presence for Oregon's Mt. Hood Territory.  He's excited to be a part of the Pterofin team and help spread the word on something that will help bring so much positive change to the world.

Co-inventor and Professor Robert Breidenthal, from the University of Washington College of Engineering explains, "The exploitation of novel physics, like nonsteady effects in aerodynamics, is an attractive approach to develop green energy technologies.  The key idea with the nonsteady aerodynamics of wings is that it takes time for a boundary layer to separate.  So when you pitch an airfoil up suddenly, the vorticity in the boundary layer takes time to move up away from the surface.  As long as it is close to the airfoil surface, the lift coefficient can be very high. 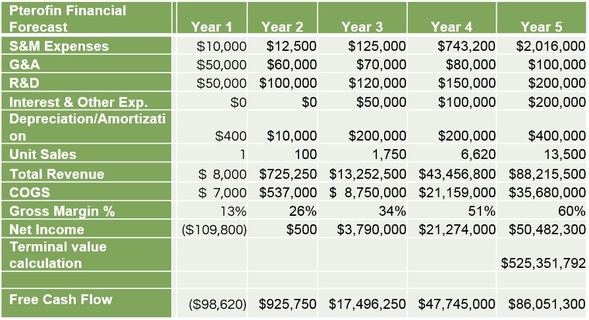 Pterofin Inc. is currently in Pre-Series A round, raising seed money to help pay for materials and testing equipment, as well as legal fees for the patent and corporate navigation.  Bootstrapping with 15k and raising almost 50k, Pterofin Inc. has another 150k in common stock left to sell, valuing the company at 800k pre-money.  Once raised, Pterofin Inc. will open a series A round, valuing the company at 10 million dollars and should exceed 100 million in Revenue after five short years.

Of the 150k needed to be raised, 10k will be paid to the University of Washington to become a Project Sponsor for their Industry Capstone Program.  These funds will be for the student material cost to build and test a Pterofin prototype, as well as the cost of the lab facilities, shared equipment, and administrating the program.

Another 50k will go toward research and development on the technology through outside engineers and various contractors.  Several demo sites are going to be installed and their efficiency with generating electricity will be recorded and displayed in real-time via webcam here on Pterofin.com.

Our legal fees should not exceed 25k over the next year.  The USPTO has sent us our Final Office Action Response and our patent attorneys seem optimistic that the patent should be issued to Pterofin, Inc. before 2018.  Our patent is also still pending in the country India, which is growing at a staggering rate.