This spreadsheet demonstrates the kWh's per year a single wing would generate in an area having an average wind speed of 8 mph.  Assuming a rectangular planform of this single wing, and given it's span(height) is 12 ft., with a chord(width) of 5 ft. 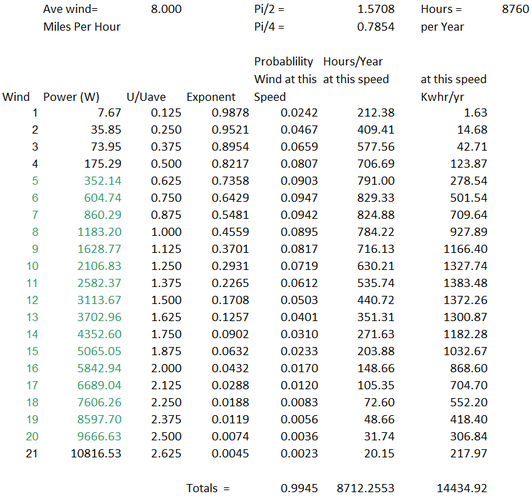 According to the US Energy Information Administration, www.eia.gov, the average American home uses 11,496 kWh a year. In Seattle, a six foot Pterofin mounted on your home or somewhere on your property can generate up to 2 or 3 thousand kWh's annually, depending on placement and the surrounding trees or other structures.   According to the chart above, a single Pterofin wing twice as large and can produce 14,434 kWh annually.

This next spreadsheet demonstrates the total kWh each year a 5 foot fin would generate in a given water speed.  This technology is scalable and can be installed in rivers, tidal currents, or oceanic currents.  As you can see below, this product placed in a 2 mph current can generate 12,133 kWh annually.

For only a few thousand dollars, Pterofin products could allow the average US homeowner to be energy independent and free from a growing and ageing power grid. 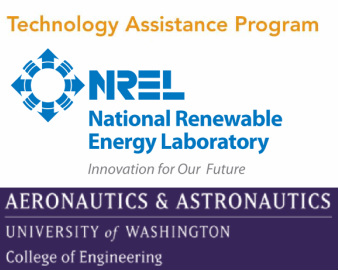 Engineer Carl Baker with PNNL, under the Technical Assistance Program, received funding from the DOE to study our patent and write up a technology note which summarizes recommendations and observations about Pterofin technology.  "The design concept is effective in capturing energy from any moving fluid – wind or water are the most widely available candidates."   "With the difficulties of power generation and the characteristics of the device itself, a very attractive application of the Pterofin technology may be in developing economies.  If a kit consisting of a very few simple and inexpensive parts (and some plans or general directions) could be provided to individuals, they could construct a micro-scale generator system using mostly locally-obtained materials.  A very small generator system would also provide sufficient power to recharge a cell phone or LED flashlight over the course of a day.  Making these devices available to low-income people in developing economies could provide a considerable improvement in quality of life at a very low cost."

Senior Engineer Palmer Carlin, with the National Renewable Energy Laboratory, confirmed the math associated with the estimated power output of an oscillating wing and helped create the spreadsheets above.

​Co-inventor and Professor Robert Breidenthal, from the University of Washington College of Engineering explains, "The exploitation of novel physics, like nonsteady effects in aerodynamics, is an attractive approach to develop green energy technologies.  The key idea with the nonsteady aerodynamics of wings is that it takes time for a boundary layer to separate.  So when you pitch an airfoil up suddenly, the vorticity in the boundary layer takes time to move up away from the surface.  As long as it is close to the airfoil surface, the lift coefficient can be very high.  The figure of merit for a windmill or watermill is the ratio of the lift coefficient raised to the 3/2 power divided by the drag coefficient to the first power.  So high lift coefficients, even at the expense of some additional drag, are desirable.  In comparison to steady flow through a conventional, horizontal axis wind turbine, for example, the maximum lift coefficient can be increased in nonsteady flow with blades that rapidly increase their angle of attack."

July 13, 2021 to Present Date - Pterofin's application accepted by TEAMER RFTS 3 as a Technical Support Recipient.
​
​Pterofin is currently working with Pennsylvania State University – Applied Research Laboratory to test a scaled model to confirm the predicted mechanical and operational characteristics of the Pterofin Skimmer concept. This technical assistance will validate the skimmers predicted electrical and mechanical properties as well as the behavior of the fluid flow around the hydrofoil. This assistance has been made possible by a group funded by the DOE known as TEAMER. Their mission is to accelerate the viability of marine renewables by providing access to the nation’s best facilities and expertise in order to solve challenges, build knowledge, foster innovation and drive commercialization.